The not Mount Shannon hike 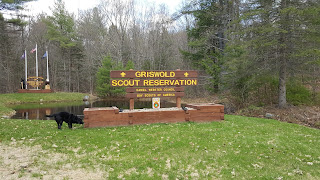 Friday Thing 3 attended 2 APEX programs at Hidden Valley. It's an hour drive so I decided to stay and do a little hiking. It was overcast in the morning so I did not set out until lunchtime.

The plan was to hike the red trail to meet the blue trail to the top of Mt. Shannon which is a small mountain on the camp property. I would then take the yellow trail back. This is the map I used.  I found a lot of red trail markers, but they were not the red trail.


I started down what I thought was the red trail, until the trail markers disappeared. I saw 1 blue marker, and no others. There was a nice snowmobile trail so I followed that. That lead me up to a nice field by a road. When I got to the road I saw the field was posted 'No Trespassing', so I couldn't return that way. So I followed the road to the next road, and eventually to the entrance to the camp. This is where I met up with Tucker and his owner.


Tucker seemed to want to lead me back to the camp, and his owner was very good with directions. We eventually made it back to the camp and I found the yellow trail. At this point it was only about an hour until Jacob's program was over so I didn't think I'd have time to do the entire trail loop. 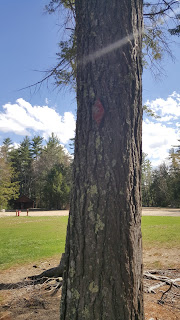 Eventually I found the start of the red trail. I walked around for a bit but never found the rest of the trail markers for it.

So I set out to hike Mt. Shannon and instead had an adventure.