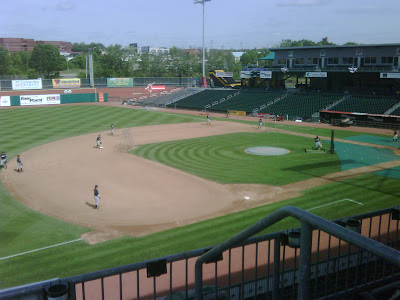 Through a fundraiser my husband participated in we received tickets to a Fisher Cats game Memorial Day weekend. In addition to the game we also received a tour of the stadium before the game. The picture above was taken from one of the decks next to the box seats.

All the kids had a great time! We received a full tour, including the press box and behind the dugouts. The kids were able to go on the field during the singing of the National Anthem and they had activities between each inning. One staff member was dressed as the Tooth Fairy and had a little 'helper' who helped her clean the bases before the game. The small playground we had seen at a game last year was replaced by a play area behind the bleacher sets that had 3 different inflated activities for the kids - a slide, bouncy house and batting cage. Each inflatable activity had a staff member monitoring it and access to the area was limited. We went later in the game and had to wait our turn to enter since the area was full. The safety part of me would gladly wait rather than have the kids jumping all over each other in an overcrowded area.

The staff and employees at the stadium were pleasant and really are an asset to the game! Despite long lines at some of the food vendors everyone was nice and not rushed. Clean up crews were in constant motion keeping the stadium clean. For each activity that involved kids on the field the staff stayed with them and made sure no child left the field without a parent to pick them up at the gate.

The only constructive criticism - the new bouncy house play area was located on the deck behind the right outfield bleacher seats. This was the only smoking area in the stadium and occasionally I could smell smoke while waiting for two of my children who were in the bouncy house. I'm not sure what happened to the traditional playground that used to be behind the center of the stadium.

When I was looking up the directions before we left I discovered that I could reserve a parking spot right next to the stadium for only $10! That's how much the private lot next door charges and half the cost of what we paid to another private lot when we went last summer. You can reserve your spot on a first come/first served basis the day of the game until 3pm. Very much worth it to not have to walk little kids down the street after an evening game.

Taking four kids ranging from 3 to almost 12 is always a bit of a challenge, but there was enough going on to keep everyone occupied and interested. I had no problem walking my 3 year old up and down the stadium when she really didn't want to sit in her seat. The fireworks show afterward was a perfect ending to a great evening at the ballpark. I am already looking forward to taking the family to another game.