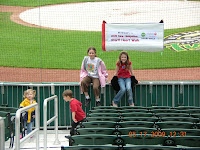 This past Sunday the kids and I walked in the NH Heartwalk. This was our second year doing it and we had such a great time! All of the event organizers and volunteers were so positive, upbeat and genuinely friendly to all the participants. This was our first year walking the Heartwalk in Manchester, NH as this year the Seacoast Heartwalk merged with the Central NH Heartwalk.

My older daughters initially didn't want to walk this year, but became really excited when we they found out the walk would start and end at the Fisher Cats Stadium. We're not that familiar with Manchester so we looked the directions up on the web and headed off. For such a large city the stadium was very easy to find and we had no problem finding nearby parking.

It was slightly overcast and lightly raining, but registration and vendor tables were all set up in the grandstand out of the weather. We (I) took the Healthy Heart Pledge and visited the Go Red for Women table. The kids had their faces painted and played some kids games they had set up in a kid's activity area. There was even someone handing out small blow up beach balls with hearts on them.

The light mist cleared as the walk began and we had fun walking through the mill area. I did see the sign for the SEE Center which is a fun kids museum I've always wanted to take the kids to, so now I know how to find it!

The plan was to walk the 5 mile loop. However as we approached the 2nd water stop my oldest (the one who wanted us to speed walk at the start!) saw the large hill and pretty much announced she was ready to walk back. My second daughter who I expected to want to turn around pretty quickly wanted to keep going! But by this point the 2 little kids were really starting to fight with each other in the stroller so we did turn back. So we ended up walking roughly 2 miles.

Back at Heartwalk Central the kids enjoyed the Climbing Wall compliments of Vertical Ascent of Manchester and some great BBQ from The Meat House. We took some fun pictures of the stadium and the little kids got a chance to run around the much more vacant grandstand.

We had a lot of fun! The Fisher Cats Stadium was a great location to host the event! Easy to find, ample nearby parking, plenty of restrooms with baby changing stations (hey, with 4 kids this is a plus for me!) and there was an elevator to get us up and down the grandstand. The only suggestion I could make for next years Heartwalk is to place the grills in the larger open grandstand area and not next to the elevator as we couldn't navigate the narrower walkway to the elevator due to the food line and had to go bump, bump, bump down all the stairs. However lots of people offered to help! My son had fun walking down the stairs and my youngest got to enjoy the bumpy ride.

We're still taking donations if you'd like to help us wrap up our Heartwalk fundraising! We didn't meet our goal, but you can help us get a little closer! https://www.kintera.org/faf/donorReg/donorPledge.asp?ievent=281714&supid=252727728.
American Heart Association NH Heartwalk