At least the house didn't burn down 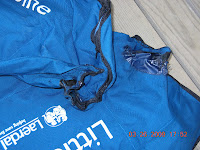 While I was planning on blogging exclusively on nutrition this month I thought I'd share our little emergency today.

The interesting picture is what Laerdal Little Anne mannequin bags look like after they've melted from extreme heat. Yup, we almost set the house on fire today.

Not a proud thing for a CPR & First Aid Instructor to admit. While picking up the basement I put the bags on top of my pellet stove so the kids could ride their tricycles in the basement. The stove was off, was cool to the touch and the burn chamber was empty because I had cleaned just a little while beforehand. When the kids started fighting over toys I took my youngest upstairs for snack leaving my 3 year old playing downstairs. I never would have imagined that he would open the little door on the side and turn up the thermostat on the pellet stove. He turned it up high enough that it loaded pellets and ignited. I smelled the burning plastic and found him hiding in the basement. The basement was full of smoke and I'm really surprised that my smoke detector never went off.

He is fine, we're all fine. Had the FD come and help evacuate the smoke. Gave him a lengthy time out in his room as I was furious at first. Scared, angry and ready to talk came roughly in that order later. I'm angry at myself for placing the bags there, I usually don't put anything near it during heating season, and I'm surprised that he decided to play with the controls. Tomorrow we'll be replacing the smoke detector and figuring out how to prevent any of the kids from reaching the stove controls. I have some more cleanup to do- mostly laundry to re-wash since I'm sure the clothing downstairs reeks of smoke, but I am also thankful that we're all okay and that I smelled it as quickly as I did. Our house is still standing, no one was hurt and the damage is minimal, it could have been a lot worse.